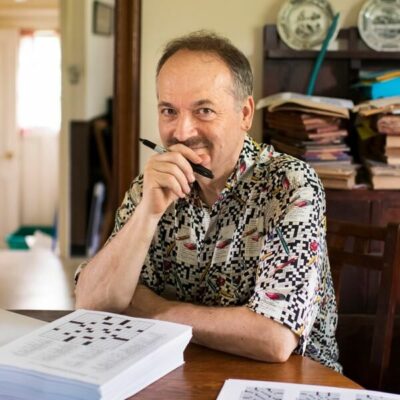 Will Shortz Birth and Childhood:

A one-of-a-kind nonconformist philosopher of crosswords and a master mind of everything crossword. He was born August 26, 1952, in Crawfordsville, Indiana, United States. Now Will Shortz is a crosswords creator and editor for The New York Times.

Mr. Shortz has always been fond of crosswords at a very young age and wanted to build his future based on a particularly special hobby of his.  In 8th grade, he wrote an essay entitled “Puzzle As A Profession”. In this respect, Shortz stated that he had always imagined his life selling puzzles, 15$ each and sitting in his attic managing his ideas on how to survive. His dream job has always been a professional crosswords maker. His paper has in fact gained him a B+.

At the age of 13, young Shortz referred to Mr. Dmitri Borgmann and asked for assistance on how to transform crosswords into a professional career.

At the age of 14 he sold his first puzzle to Venture Magazine. Two years following, he became Dell’s constant subsidizer.

Will Shortz Adulthood and Education:

Growing up, he became licensed in Enigmatology ( the study of crosswords and puzzles) and became the only person who possesses such a degree in 1974. This was achieved through his establishment of his own curriculum in Indiana University’s individualized Major Program. In 1977, he claimed his Juris Doctor degree from Virginia’s School of Law. He intended to study law for at least 10 years just enough to obtain financial stability and then retire to continue his passion; crosswords.

However, Shortz was more focused on how to build a future using his love and commitment for crosswords. Thus, he didn’t give much attention to Law and thereby didn’t pass the bar exam.

In 1989, he started his career at Penny Press Magazine, yet it was short-lived. For 15 years he moved and switched his workplace to become an editor from 1989 -1993. Since the 1930s he has been the 4th New York Times crossword editor. During his service in The Times, Shortz said that he was by far the youngest compared to his forerunners; his style left out everything that is old and rusty and adopted a more modern touch to include everybody.

Additionally, he has been the master on NPR’s Weekend Edition Sunday since the debut of the show back in 1987.

His Crosswords Work and More:

Once Shortz had relished his position as an editor in The New York Times, he created some amendments to the NY crosswords.

He began to enhance crosswords and their difficulty level; each day he would create even harder puzzles to solve in order to satisfy different skill levels and brains. Not only that, but cultural referencing has expanded to encompass television, movies, and rock music.

Each puzzle that Will edited and that can evoke and bring out the most response appeared on Election Day 1996. When it comes to his contribution in the cinema, Shortz created the riddles in Batman Forever. In television, he has been a guest in the episodes of “The Simpsons” and “How I Met Your Mother” portraying his own character. Additionally, he was part of the Award-winning documentary film Wordplay broadcasted in 2006.

Will Shortz possesses around 25,000 puzzle books that date back to 1534 along with magazines, pamphlets, small mechanical puzzles, and various other ephemeral items. This was the incorporation of his ultimate crossword obsession, and even among his co-workers, his love and obsession were something else; quite rare to find anywhere else.

His working hours are spent carefully pinpointing his crosswords and editing them with precision. They are now included in a myriad of genres like nytimes.com in print form and on smartphone Apps.

Not only that but Mr. Shortz also has another love and passion, which is table tennis. In 2011, he established the Table Tennis Center with his Robert Robert’s. This club that they both share includes 150 members and has organized many events such as The North American Championship as well as other weekly series broadcasted every Wednesday evening.

A Master mind in puzzles and crosswords, such a passion has blessed him with worldwide recognition. “I am very lucky”, “If you can figure out what you love to do the most – and then see if you can make a living doing it.” He spoke. An inspiration and a success story to always keep in mind while you pursue your dreams.